We are super excited to present to you the 2017 Homevida Jury Yay!!

As you all know each year we bring together a selection of young, talented and vibrant individuals to serve as our judges for the short script competition and this year is not an exception.

This year we have a mix of new and old faces in the judging team who are young, inspirational individuals that are all committed to making a positive impact in the film industry.

Here is a list of the Judges and their profiles. Enjoy! Chris Odeh is a passionate producer, project manager, ardent trainer, marketer and creative scriptwriter with over a decade of experience in the media and entertainment industry of Nigeria.

Born in Ibadan with a Mechanical Engineering background, Chris showed interest in the entertainment industry as he carved his teeth as a comedian, an event compere and stage play director with his christian youth group while in Kano.

He was part of the budding production crew of  Africa’s Pan-African talk show Moments with Mo in Lagos after which he moved to Abuja and worked with BBC trained Director Sebari Deite-Spiff and MNET New Direction Whiz Oliver ‘Tambo’ Aleogena where he produced and managed productions like 12:30 (feature length movie), ACGSF (Documentary for CBN) amongst others.

He won our hearts in 2011 when he won the “Best Child Friendly Film” Category for Homevida Awards with his script titled “ENITAN” a story about a girl that rose above her reading incapacity (dyslexia) to become an outstanding student.

Chris is also the founder of Sozo films; a one stop hub of creative and skilled story tellers with a mandate to inspire, educate and entertain. The company now has 3 installments with Abuja as the head office and others in Lagos and Kano. Sozo Films produces content for local and international platforms like MNET, Africa Magic, MYTV, Ibaka TV, Homevida,Ebony Life TV and a host of others.  Chris has also produced several movies some of which include: 12:30, Learning Curves, Make a Move, Oloibiri retold, Dise’s Secret, Once Upon a Wish, Dinner, Chasing Hanifa and the list goes on and on.

He is currently consulting for top-notch companies like Ramsey Films, Right Angel Productions, Red Star, PPDC and a host of others. Chris is happily married to his best friend of many years Joy and their union is blessed with two boys. Linda Ejiofor made her entry into the world of acting in 2008, when she was cast as Bimpe in MNET’s Nigerian flagship soapie; Tinsel. Linda’s continued portrayal of this ambitious, mischievous and accident prone character helped charm her way into the hearts and homes of audiences all over the continent. Beginning in 2012 the Nollywood beauty began her venture into the big screens.

Her first foray was as the wild-eyed idealistic youth corper – Ejura in the award winning romantic comedy; The Meeting. Her performance as Ejura was widely acclaimed by fans and critics alike and Linda received several award nominations including an African Movie Academy Awards nod in 2013 for Best Supporting Actress. In March 2015, Linda Ejiofor walked away with the Africa Magic Viewers’ Choice Award for Best Supporting Actress. In 2013, she starred in the psychological thriller; Secret Room. In 2015, Linda would land leading roles in two more films; A Soldiers’ Story and Out Of Luck. Released in December 2015, Out Of Luck was one of the top 20 highest earning films in Nigerian cinemas for the year.

Born in Lagos State, Linda hails from Abia State in South Eastern Nigeria. She is a graduate of Sociology from the University Of Port Harcourt. Her primary education was in Surulere, Lagos State, then she went on to the Federal Government Girls College, Onitsha.  Linda loves dancing, travelling, watching movies, reading and playing volleyball.

Some of her award nominations and wins include:

Away from the cameras, Linda is determined, disciplined and down to earth, but also has a great sense of humour and a zest for life. 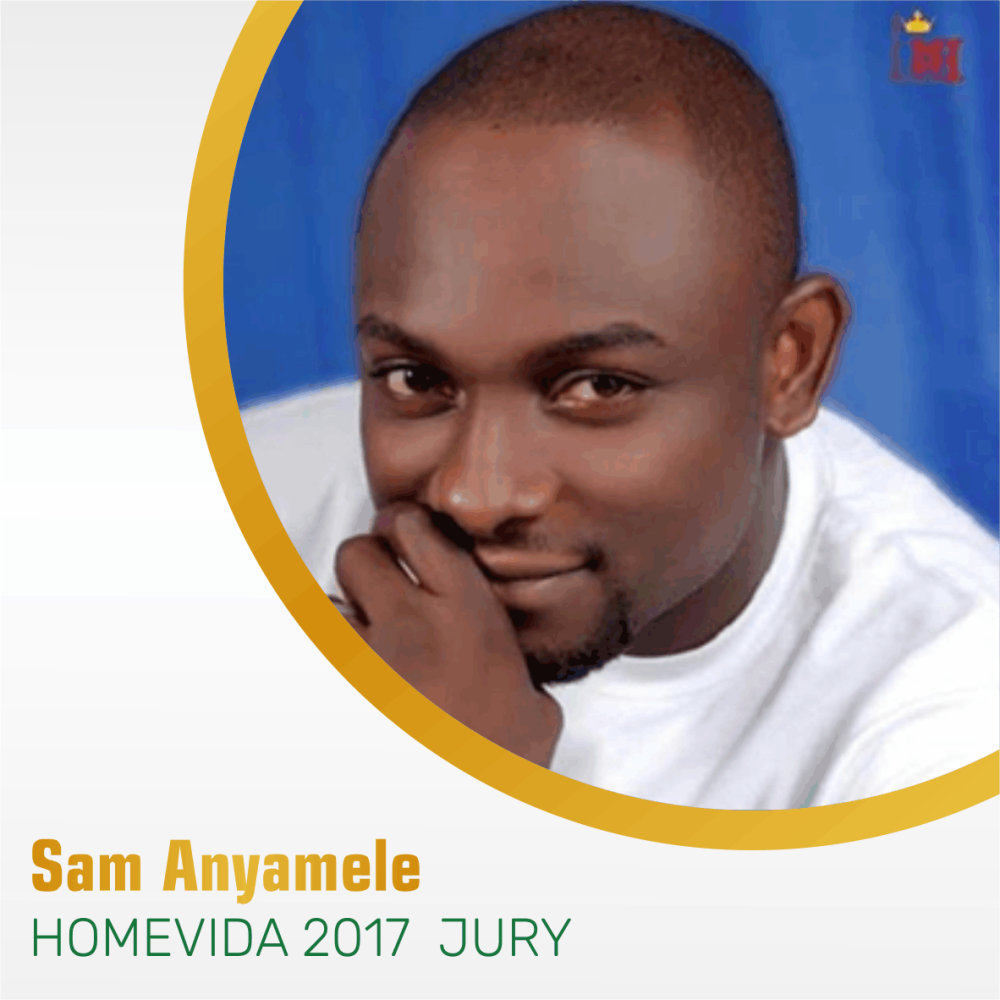 A Christian, Born in Lagos, Nigeria from Mkporobe-Asa in Ukwa East L.G.A of Abia state, Sam is the MD/CEO of  SUA-GLOBAL INFINITY CONCEPTS, who Produced / Directed “Spouse’s Secrets”  which was in Nigerian Cinemas from Friday June 30th  2017.

Sam is a 3-time member of Jury for HomeVida Awards, a platform for young and enterprising filmmakers, he was a Celebrity Guest/ Regional Judge in a reality TV project (AMBO, 2009), he was one of the NOLLYWOOD DELEGATES for the celebration of NIGERIA @ 50 under the leadership of President Goodluck Jonathan in 2010, RISE’S Nominee for Nigeria Youth (BRF-2011), also an Associate Producer in THE NEXT MOVIE STAR in 2012, Google’s Guest on Nollywood/SID 2014-2015, a Guest Lecturer/Facilitator at the Centenary Project an initiative of The School Of Media And Communication, Pan-Atlantic University. These reality shows and engagements have identified, trained and groomed young vibrant talents / artistes in the Entertainment Industry and the Arts and Culture Sector at large.

Presently he is an Adjunct Lecturer at the Department of Arts and Social Sciences, Faculty of Education, University of Lagos. He is also the Vice Chairman of the Alumni Association of the University of Lagos, Nigeria (Lagos State Chapter). With memberships at various related allied associations in the creative community/ culture sector, Sam holds a Post-Graduate Diploma in Cultural Administration from National Institute for Cultural Orientation (NICO), a Masters degree (M.Ed) in Educational Administration & Management from Unilag amongst others. 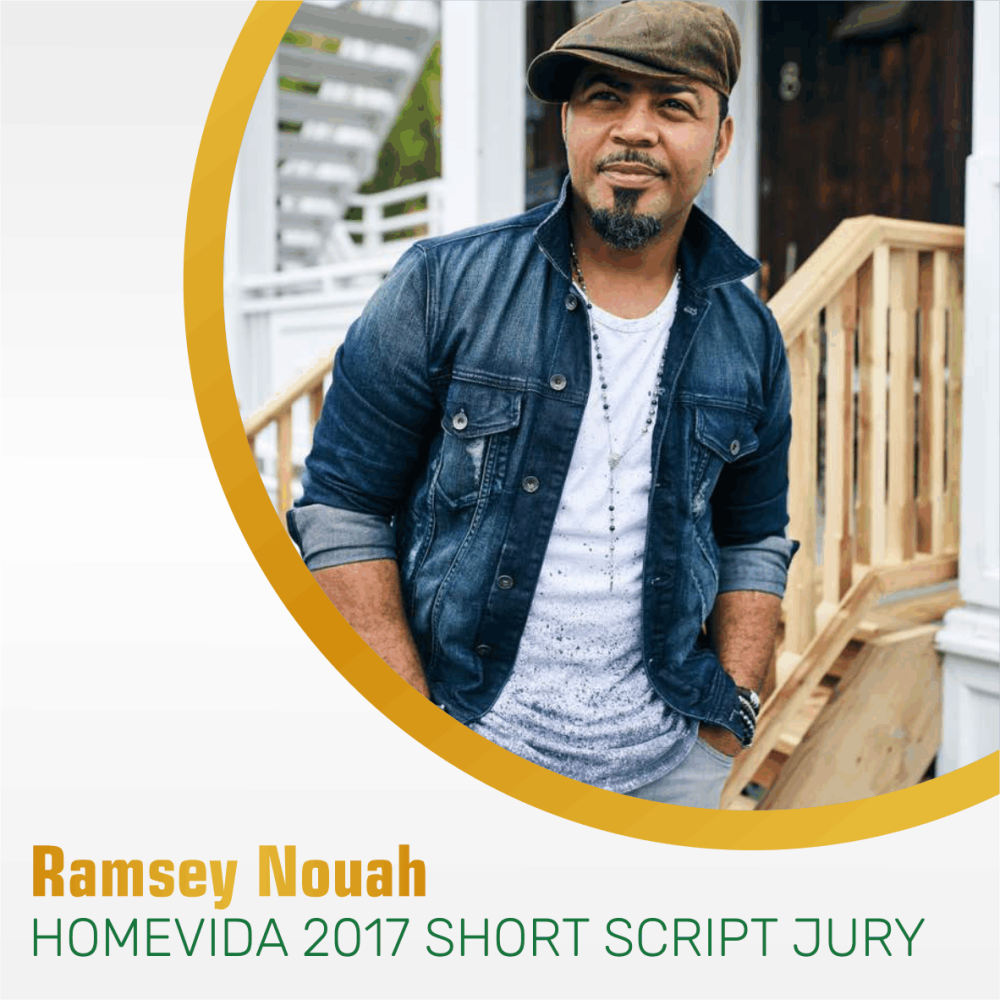 Ramsey Nouah Ramsey Tokunbo Nouah Jnr. began his acting career in 1990. His most widely recognised debut appearance as Jeff in popular Nigerian television soap opera, Fortunes, quickly established him as an act to watch. Since then, he has captivated audiences across Africa and beyond with his award-winning performances in hits such as Silent Night (1196), Dangerous Twins (2004), Figurine (2009) and most recently, the hit historical movie, ’76 (2014), among many others.

In 2014, he was unveiled as the first and only Nigerian Actor on the laudable Nigerian Oscars Selection Committee. Recognised for his excellent work and with a burning passion to contribute to the growth of the Nigerian entertainment community, Ramsey Nouah decided to expand his portfolio to include directing and producing, which led to the launch of his movie production company, Ramsey Films.

In his new capacity as producer/director, he acted and directed Last Caller, directed Brewed in Rwanda, co-directed 30Days in Atlanta (2014), as well as produced and acted in Elephant in the Room (2012). In the same year (2014), he gave a speech to the business community on entertainment at the globally recognised World Economic Forum, Switzerland. Later that year, he received the Outstanding Industry Contributors Award by Africa International Film Festival (AFRIFF).

Ramsey Nouah is also passionate about giving back to the community; a passion which has earned him recognition by the united Nations for his philanthropic works. 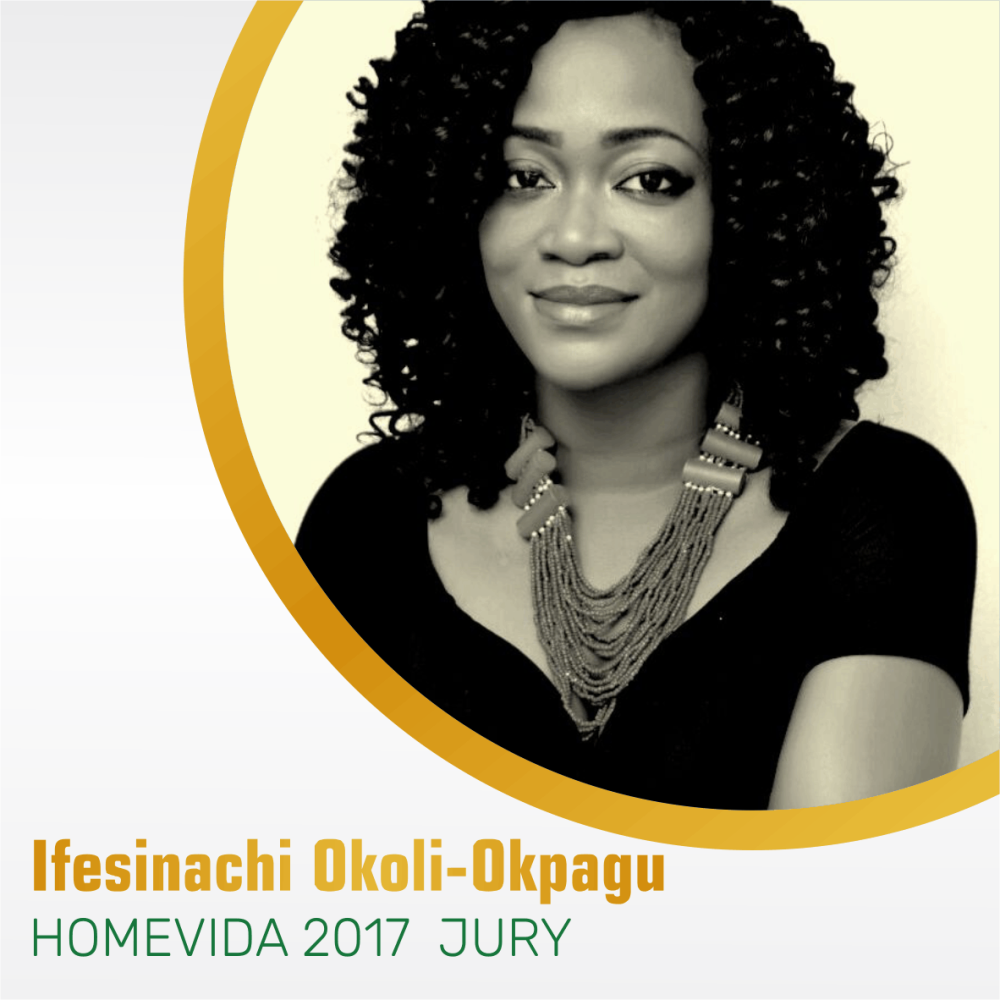 Ifesinachi Okoli-Okpagu is a Lagos―based brand & innovation strategist and versatile writer, who has written TV and film content with local and international cast. She began her screenwriting and TV production career with the Pan-African television talk show, Moments with Mo, where she handled screenwriting in addition to a role as an Associate Producer. Since then, she has worked with several producers locally and internationally, supporting them to translate their vision to workable, breathing scripts. A few project titles she has worked on include Africa Magic’s ‘Hush’, Ebonylife tv film, ‘Dise’s Secret’ and upcoming Norwegian-Nigerian feature, ‘Lost Café

She is a three time jury member and script consultant on the Nigeria Film Integrity Awards for up-and-coming creative talents, Homevida, for two years running. She has also served as a juror on one of Africa’s most prestigious movie awards, Africa Magic Viewers’ Choice Awards, AMVCA.

BBC and British Council trained, Ifesinachi graduated from the University of Benin with a B.A degree in Fine & Applied Arts. She also has an MSc. Degree in Marketing Communication from the Pan-Atlantic University, where she graduated top of her class. She is the author of ‘The Domestication of Munachi’, a novel published by one of Nigeria’s notable publishing houses with award winning titles, Parresia Publishers. In 2016, Ifesinachi was listed as one of the 100 most influential Nigerian writers under 40 by the Nigerian Writers Awards.

Passionate about turbocharging the African creative economy, Ifesinachi founded the online job listing and casting site for entertainment people, Auditions.ng, which recently got invited to join the She Leads Africa (SLA) 2017 Oxfam Accelerator Programme. Auditions.ng makes it easier for job seekers in the entertainment industry to access jobs from wherever they are, by publishing casting notifications and sending hirers the profiles of talents that match required skills and attributes. 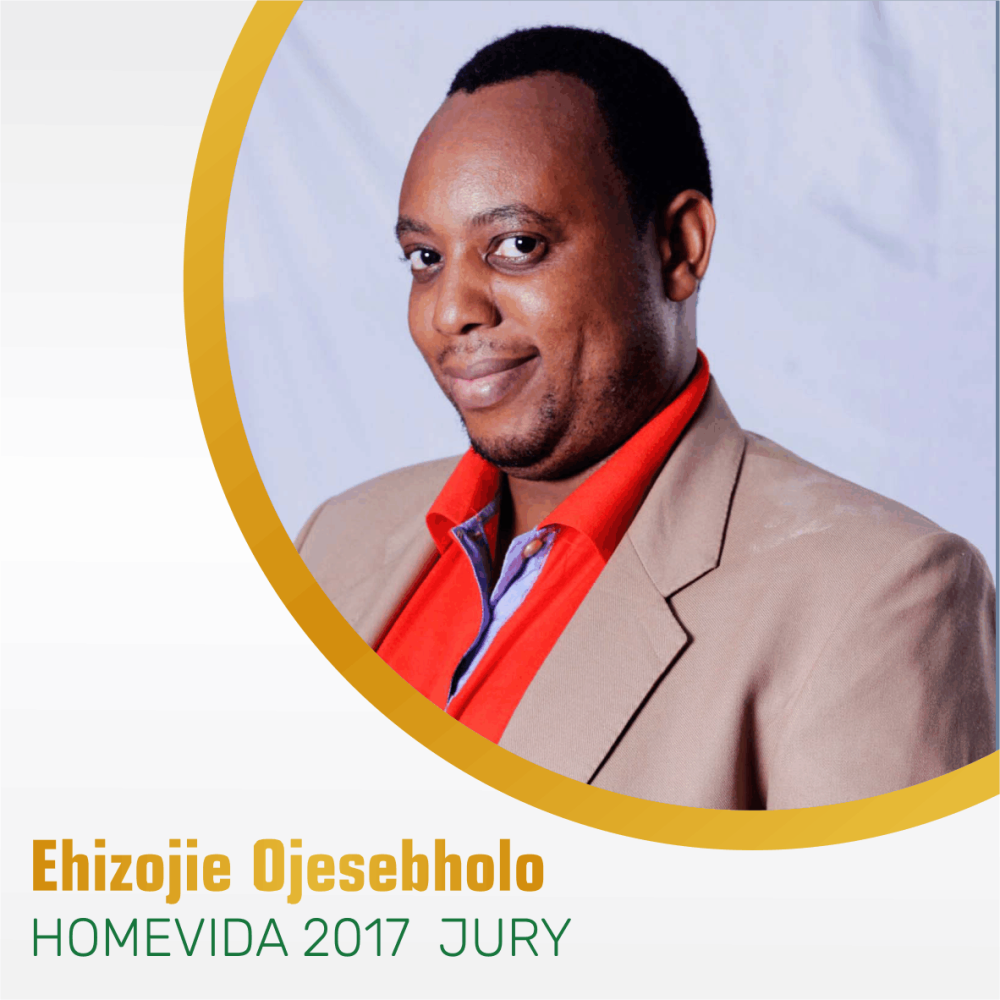 He is also a motivational speaker, a youth counselor, & film lecturer. Ehizojie is married to Ibironke; a writer, art director, educator, & producer. And they have four beautiful children.

WATCH OUT for the next post as we reveal the winners of the 2017 Short Script Competition!

Five reasons why you should see Tolani Weds Ayo! - It addresses the subject Rape in an African setting! - There are a lot of lessons to be learned. - it's action packed! - It features some of your favourite actors. -You are on a lockdown!!! 😋 Click the link in our bio to see full movie
Hey Guys!!! Found tips to enable you work from home 👨‍💻👩‍💻 and decided to share Scroll to also see a guide on things you can do to stay mentally strong daily #staysafeeveryone
If you were tasked to produce a film on the #COVID19 pandemic that has ravaged the world, what perspective would you highlight? #scriptwriters #Producers #directors
#throwbackthursday to the screening of our short film "Sealed Lips" at Total Child Model School Abuja? Click link in bio to see full video #Saynotorape #SexualAssault
#Repost @procurement_monitor @download.ins --- As the numbers continue to increase, it’s important to take safety percussions and one of which is staying at home! The importance of this can not be overemphasized. Let’s all stay safe #codvid19 #stayhome #staysafe #lockdown
Have you seen the movie Tolani weds Ayo? A film on sexual abuse and rape by Homevida If yes what was your best scene? Comment below👇 First to comment gets 2k recharge card Click link in bio for full movie if you haven't seen it yet!