Ranging from thriller to rom-coms to drama and comedy. This is Homevida’s top 5 must watch Nollywood movies. In no particular order: 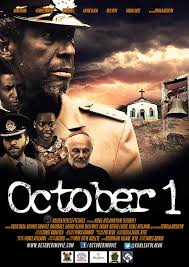 Produced and directed by acclaimed movie director, Kunle Afolayan, October 1 has been described as a dark psychological thriller. Starring nollywood veteran Sadiq Daba, October 1 centers around Danladi Waziri (Sadiq Daba) a police officer from Northern Nigeria who is posted to the remote town of Akote in Western Nigeria to investigate the female murder cases in the community and have them solved before the Nigerian flag is raised on October 1, Nigeria’s Independence Day. it has been slated to be premiered on September 28, 2014 with a general theatrical release on October 1, 2014. The film also stars popular fashion designer Deola Sagoe, Kanayo O. Kanayo and Bimbo Manuel amongst others. No plans for the independence day holiday? Go see this movie!!! 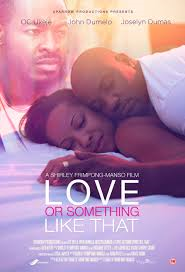 Another blockbuster from the stables of Shirley Frimpong-Manso and Ken Attoh. Love or Something like that is a poignant story about moving on when there is no light at the end of the tunnel. In the movie, a young surgeon’s chance meeting with her ex-boyfriend throws her world into absolute chaos when she makes a horrible discovery about her past and what could be the end of a great career, and beautiful marriage. Starring Joselyn Dumas, John Dumelo and OC Ukeje, it seems like a good watch. It premiered on the 17th of April in Ghana. I look forward to watching it!!!

I can’t wait for this particular movie to start showing. My #featurefriday from last week (click here) is definitely on the must watch list. This rom com is distributed by Film One distributions, same Nigerian based company credited with the successful box office smash hit – Half of a yellow sun. The celebrity premiere is slated for October 16, 2014 at the Genesis Deluxe Cinemas, The Palms, Lekki, Lagos. The movie will debut across cinemas in Nigeria from the 24th of October 2014. Can’t wait, can’t wait, can’t wait!!!

4) A letter from Adam

Self-written and self-produced by Ghanaian actress, Lydia Forson, ‘A letter from Adam’ is a contemporary story about love, loss, and hope, aimed at drawing audiences into a realistic cycle of life seen through the pain of loss, the journey of self-discovery, and the courage and strength to find hope in the face of adversity. Starring Meet the Adebanjo’s star Wale Ojo, Adam’s Apple Naa Ashokor Mensah Doku and of course the magnificent Lydia Forson, this movie has been getting serious buzz since it premiered in Ghana. 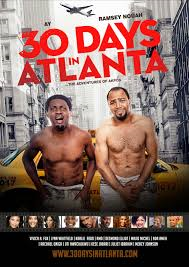 From the trailer to the banner, this sure looks like it will be hilarious. This is the debut feature film of popular comedian Ayo Makun and is star-packed. Starring Hollywood stars Vivica Fox and Lynn Whitfield. the movie has been described as the perfect blend of Hollywood, Nollywood and Ghallywood and has already been nominated for various awards. See trailer here